I go a little crazy when I’m researching for a story. A little detail that might be three words can have a week of research behind it. Case in point: the cost of a hack from the mail coach terminus in London to Mayfair.

In my current story, I wrote a scene where Elizabeth traveled to London, and then to a friend’s house in Mayfair. During my research, I found out about the cost of mail coach trip, tips, meals, and extra weight charges for baggage. Oh! That last bit caught my writer’s interest!

The last time I traveled by air, I weighed my bag at home and removed a bunch of stuff to meet the maximum baggage weight. Of course, when I got to my destination, it was all the wrong stuff! But I managed to get away without any extra fee.

But not so lucky for my heroine: I decided to include an overweight charge for Elizabeth!

Not only that, but before she left Longbourn, she knew exactly how much her trip would cost, and had brought nothing extra. Knowing she’d be short for the hackney coach trip through London, she asked the hack driver to drop her part-way to her friend’s house. Of course, a certain someone just happens to be riding by in his carriage as she’s struggling to walk with her heavy bag, and rescues her!

It was fun trying to figure out the route of the mail coach and the location for Elizabeth to catch the hack. (Not “cab”—that name came about from “cabriolet,” in 1823.) I had to figure out Hertfordshire and Middlesex geography and find maps of old London. Of course, there was a huge gap in detail at the point of my interest! The most useful map (in terms of ease of reading and finding major locations) was Dickens’ London, from David Perdue’s Charles Dickens Page.

Other interesting pages emerged, including a book of anecdotes called The Interesting Adventures of a Hackney Coach, from 1813. It has the strangest punctuation I’ve ever seen.

But I was obsessed with making sure the extra “tanner” for the overweight bag would make a difference in the end. How much was the fare from Smithfield to Portman Square in 1813? 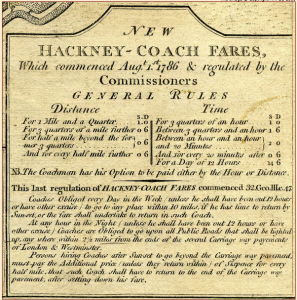 Great finds were on Wallis’s Plan of the Cities of London and Westminster (above), and tables in actual travel guides from 1786 and 1827—but I had to try to figure out the end points and probable routes, since fares tended to be listed from coaching inns and pubs, and not street addresses. Finally, I made an educated guess at 3 pence.

I have hundreds of bookmarked pages for story research, and this time, I added another dozen. Here are my favourite web sites for Regency research:

Jane Austen’s World
There are several useful tabs, but I like “Social Customs during the Regency Era.” There many interesting categories here. Sadly, there are some dead links.

Common Regency Errors by Alison Lane
This is a great resource to help to understand how to apply titles of the nobility, as well as a few other topics such as adoption and consanguinity.

The Online Etymology Dictionary
You can look up any word and find out when it was first recorded, under various definitions. It’s sometimes surprising which words are super-old and which are recent, or how a word changed its meaning after the Regency period, so the way we use it today didn’t apply back then.

Chapman’s Chronology of Pride and Prejudice
R. W. Chapman was a scholar who dedicated his life to Austen’s works. In 1923 he produced an edition of her books that was much more readable by today’s readers, and a companion book as well. In the process he created time lines for the novels. In writing a variation, it’s nice to know how your changes fit into the original.