My mother-in-law’s name is Julia, and we named our very bossy GPS after her nickname in her language: Yulka. Most of the time, Yulka comes in handy. We have to trick her every once in a while when we want to take the lesser-traveled road—what Yulka doesn’t know won’t hurt her. Mind you, we made sure she knew as much as possible with a download before this trip. But she’s a spiteful little dictator, and knows we can be like sheep sometimes.

When we left LA for Orange County to meet AHA pal Josie for the first time, and then spend the weekend with my longtime dear friend Kelly, we depended on Yulka to send us the right way through unfamiliar freeways. Within the city, she sent us past directional signs for our freeway, I5 south. After a couple of these, we ignored her and voilà , we were on our way.

Now, the map provided by the State of California is pretty minimal in information: it has no exit numbers, and not all the towns. But it didn’t matter much to us, since we had Yulka, and knew we should be headed down I5 for quite a while.

But dear Yulka decided we should head east instead of on I5 south. After a check of the map, DH and I were discussing whether to ignore her, when she instructed us to head southwest, so we relaxed and followed. However, a while later, she told us to continue past the exit to I5 and continue southwest! I pored over the map once more. It was so odd, she hadn’t mentioned any problems to avoid on I5, as she had when we’d detoured other times. I said a few choice words about Yulka, and we decided to ignore her and turned west towards the I5. When I later drew it on the map, our route was a Zed! 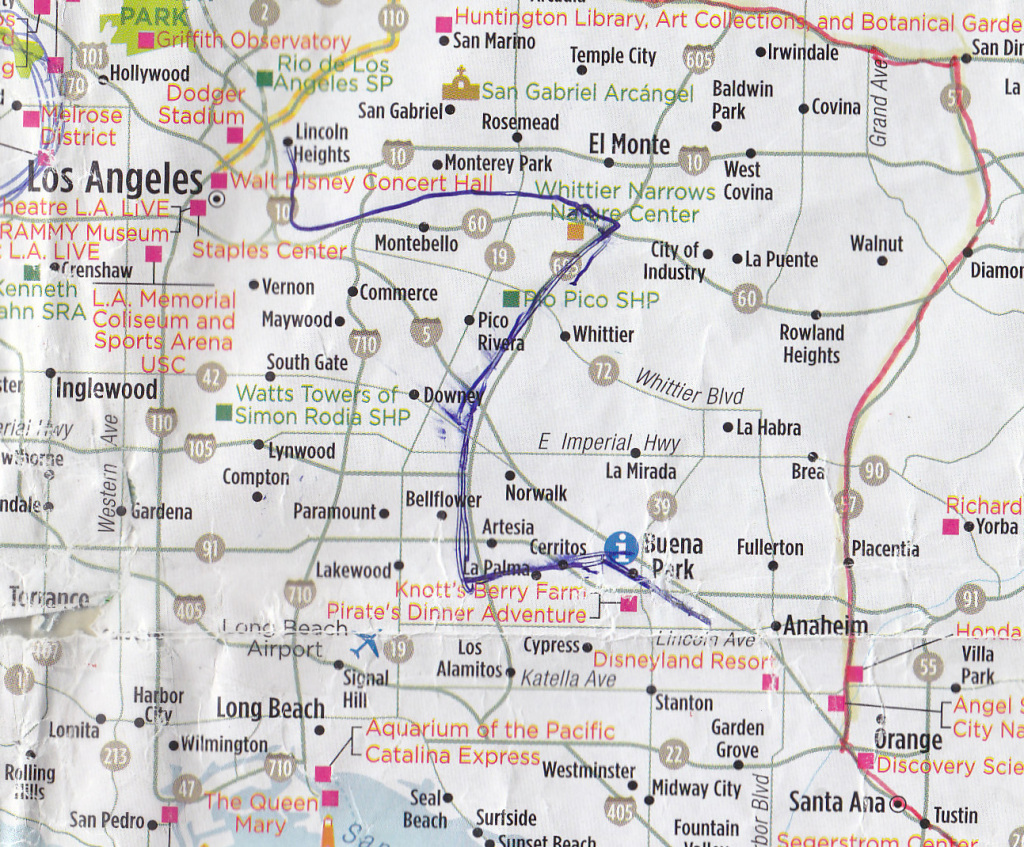 After that, she found Josie’s home without further annoyance (mild mistrust still remained!). As we approached, we admired Josie’s garden, which is watered with grey water from her home. Inside were lots of musical instruments, which was no surprise, as she plays in a band!

After a short visit, DH asked a favour: could she help him find a tire shop? We had a slow leak, and the company that had installed new tires two weeks prior wasn’t represented in California. While the car was in the shop, we had a great El Salvadorian lunch at a little place Josie chose; everything was fresh and yummy. We don’t have one in my current city, and I miss it from my younger years, and got extra curtido! It turns out a drywall nail was our slow leak, and it was an easy repair.

On to the next stop, and a short rest before more fun. Kelly and Mr. D. were in my engineering class in Canada, and I helped them get together. They’re both full time professionals in different automotive design areas, and dedicated hockey parents for their three boys, with three games every Saturday, plus practices and tournaments. 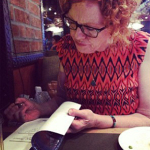 Kelly breezed in from a game to collect me and whisk me off to “Meet the Author” with “The Real Orange County Book Club,” the play on words she and her friends made from the popular TV show. Upon hearing of my visit, they decided their September read would be my first novel, Alias Thomas Bennet. Unlike the TV show, these are “regular” ladies, who have cleaned a bathroom or two in their lives, and the hour was casual and relaxed. The toughest feedback was from a reader who found the Austenesque language difficult at first, but as she got into it, she loved it.

The day didn’t end there. Another Canadian ex-pat couple of engineers, who had been relocated to southern California by her employer a few weeks earlier, took a pause in unpacking to have dinner with us. When they arrived a few minutes later than the rest of us, Kelly commented we had rushed there, too. Donna was attentive, and with an easy smile, she asked where we had been.

Kelly replied with her own smile and a head tilt, “At meet the author.”

***An aside: if asked, none of us would consider ourselves literary at all, we’re engineers. In addition, Kelly, arguably the smartest, can appear naïve because of the innocent way she asks questions, so we tease her that she’s not very bright, and she laughs with us! The book club is great for her to spend time with other women… and she’s more literary than she thinks!***

Kelly gestured towards me.

Donna glanced at me, and then back to Kelly. She didn’t get it, and her face was less animated than at first, as though she assumed we had a personal joke we refused to to share. She smiled and asked again.

Donna looked at me with wild eyes.

“You’re the author?” Her head whipped back to Kelly.

Her face showed her confusion. She’s logical. This was out of her experience. “You wrote a book?”

I nodded. Kelly and I were sharing the biggest grins.

Everyone laughed, and chided Donna that, because she’s not on Facebook, she misses everything. Oh, well, I gave her a signed copy! 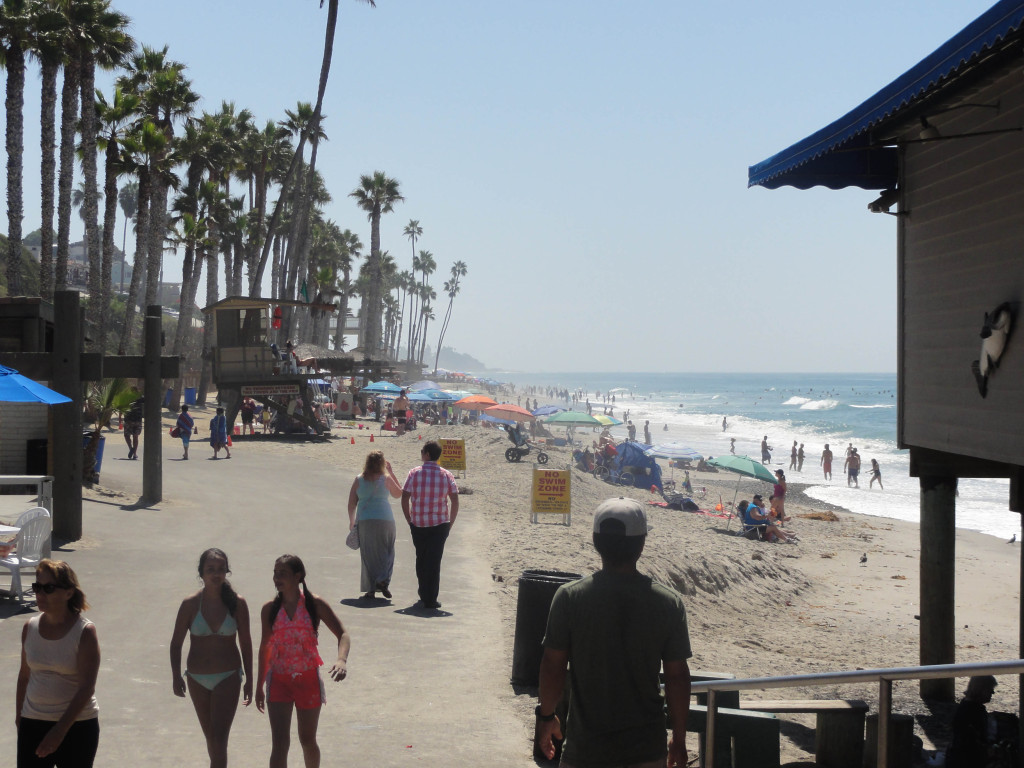 On Sunday, we had a nice brunch of galettes (Belgian crêpes) in San Clemente, and then just hung around at home with the family.

The next morning, the family was off to school and work, and we were off to San Diego, our ultimate destination. The washroom we had shared with the boys had been pristine for two days; all of us took care to wipe our messes. I didn’t hear Kelly give the instructions, but I suspected, and Monday morning, I found out what nice boys do when they have guests, because I could hardly see myself in splatters on the mirror!

Next post:  The San Diego Meet-up, where I meet my beloved Gail Warner, editor for Alias Thomas Bennet, a little birdie with a huge camera, and fellow research associates of “The Meryton Literary Society.”

Okay, I admit, that last bit was me trying to make it sound intellectual. In reality, they’re my dear friends from the AHA Chat Chits, and they’re up to no good!