She was standing on the doorstep waiting for me by the time I was halfway down the front walk. Gail Warner is not the type to wait for the doorbell and answer as if your arrival is a surprise when she’s eager to meet the last of her authors in person (me!). I’d seen photos of her, and that smile says it all. She’s warm, intelligent, and has a fantastic sense of humour. I think of her as “my Gail,” and the other authors she’s edited for feel likewise.

The day was as warm as Gail, perfect for the drive along the ocean from Orange County to San Diego that morning. We chatted like old friends, which I suppose in a way we were, after the close nature of our work on Alias Thomas Bennet gave us a bond like no other. Gail is keen to get her hands on my current work, Letter from Ramsgate, and I hope she’s pleasantly surprised by how much my writing and editing have improved from the rough work she helped me refine last spring. Of course, I learned from the best!

I could have stayed and talked all day, but I’d planned to meet the instigator of the AHA San Diego Meet-Up at the airport. I tease her by calling her “Birdie,” but defiantfalcon is her A Happy Assembly (AHA) username, and it suits. I knew she was small, but it was still a surprise because she’s so decisive and assertive. She walked up to the hotel desk and greeted them with all the polite manners of a southern lady before she stated her needs as if she would brook no opposition.

She’s been my rock over the last few years, excellent support when I was ill, and as the plot beta (similar to a developmental editor) for Letter from Ramsgate. When she told me a plot twist was an unnecessary distraction that added nothing to the story’s flow, I cut the chapter. Next, my clever scene for reunification of Darcy and Elizabeth had too many contrivances, and I had to think of a new scenario. The sweet and funny epilogue was too much of a change from the tone of the story. I didn’t realize it until defiantfalcon pointed it out.

We went for lunch and talked away, again like old friends. Job, family, pets. The day was heating up, but she’s a southern gal and used to it, and there was a nice breeze. We were both tired, and separated to rest up for the “main event.”

The AHA San Diego Meet-Up was set for a seafood restaurant on the Embarcadero, with views to the bay. Gail joked that when she arrived, she realized she knew one person, and didn’t know if I was there yet. I walked from Little Italy and thought I couldn’t find the restaurant. I was just texting defiantfalcon when I passed the USS Midway and there it was! We had a chatty seafood meal, discussing all kinds of Austen topics: the cool details in the books, the stories on AHA, the dynamics of the members, and the men! We all knew each other from AHA Chat, but to chat in person, and laugh together, was a wonderful extension of our relationships.

Afterward, we checked out the statue “The Kiss” or “Unconditional Surrender,” and the bronze installation to Bob Hope. As much as we enjoyed each other’s “real” company, it was time to head back to our hotels. When we had arrived, the place was alive with cabs, yet now a pair of pedicabs were parked near the door. After a short wait, we ambled out to the street, stopping to admire the bronze plaques that honoured past leaders of the US Navy. Pedicab after pedicab went by, but nothing else. Since three were headed one way, and my hotel was in the opposite direction, they encouraged me to take one. I thought it would be fun, but the driver was in a horrible mood.

And worse yet, I made the mistake travelers around the world make: I failed to agree on a fare ahead of time. He demanded double what I had expected based on cab rides in the city earlier! I argued for a few minutes, but it was hopeless. Much like Elizabeth in the scene in my July blog post, it was all the cash I had, but Mr. Suze wasn’t a surprise.

The next day, several of us enjoyed the San Diego Zoo’s Wildlife Safari, a large park full of African and Asian animals. I’m not well, and the day before had used up all my energy resources. DH suggested I stay back and rest, but I protested: I wanted to see the four baby lions. We were in luck! When we inquired as we paid our admission, we found they had been out where the public could see them for the first time yesterday, and maybe would be again today, at 9am. As an unadvertised item, there were few people there. Mama paced, agitated about the safety of her young, and the little ones rolled around and played lazily. 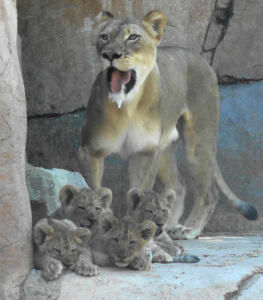 We sat back and relaxed as defiantfalcon clicked away. Her hobby is zoo photography, and she’s good: her home zoo uses some of her work for their promotional material. When she had her fill at that exhibit, we took a tram around the park to discover that many of the other animals had new babies, too: giraffes, elephants, hippos, to name a few. The facility exists to breed and protect species, and it has one rhino who will be the last of his kind. It was fun to watch the baby elephants at play. One pushed its sibling into the pond, and the wet elephant made the best of it and had a bath.

I saw the highlights before I ran out of steam, and we left the others mid-afternoon. In spite of drinking about 2 litres of water with salts, as I got to the car, I was lightheaded and had to sit. The car thermometer said it was 112oF (44oC)! However, as we descended to the city, it cooled nicely. Later, when the others were driving back, a heavy rain obscured the highway and caused flash floods. 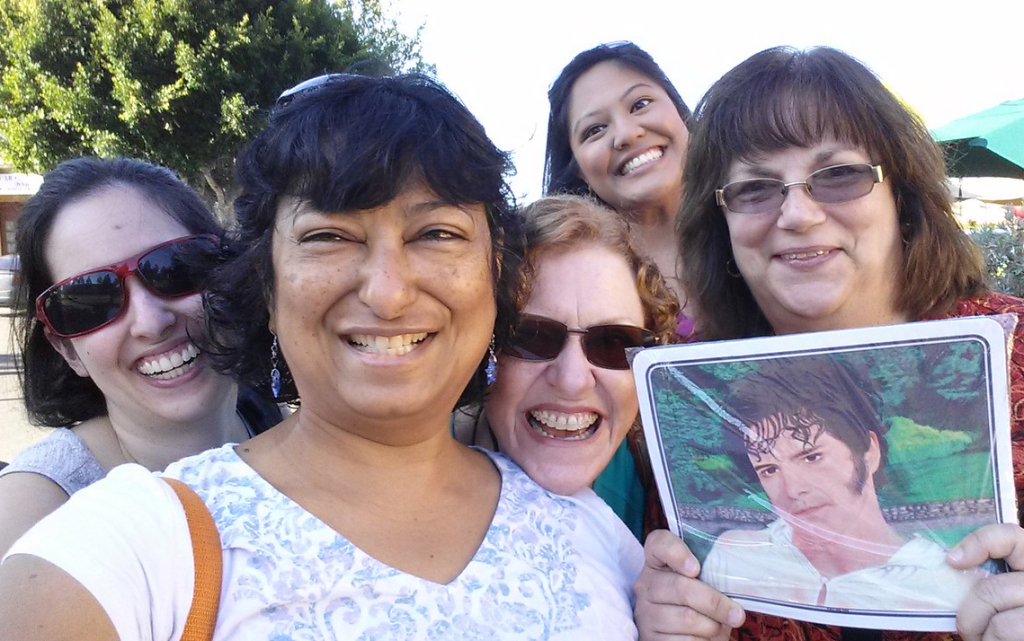 The next morning, the group was joined by josurinu for breakfast, who had driven from LA early that morning. A few years ago, josurinu, defiantfalcon, and I worked together on her two Austen-inspired modern romances, Someone Like You and spin-off Someone Like Me, my first experience as a story beta (line edit), and we call each other Team SLY. She would join Lalita and defiantfalcon to the San Diego Zoo and Sea World, where the latter two had booked a swim with the dolphins. But DH and I had seen many of the tourist attractions on a previous visit to San Diego, so we were on the road again. Besides, I had run out of copies of Alias Thomas Bennet to sign and give away!

We took three days to drive home, as expected. Friends recommended Highway 99 in California instead of the I-5, and it was a great choice: less traffic, more scenic. We uncovered the identity of the mystery trees along the road—walnuts—which I don’t recommend eating green. We lamented the fact that the Shasta Lakes were almost dry: easily 20 feet low. We revisited Cottage Grove, OR and discovered a thriving old town main street with a great used book store and coffee shop in an old theatre, where I bought a reticule. (If you’ve never been to that area of Oregon, it’s worth the trip to see the dozens of covered wood bridges.) The next day, I found the funkiest vintage story ever in Portland, OR, with 50’s cowgirl dresses among the other classic selections.

But in order to close this tale, I must back up.

Our last stop in California was to return to a location we had found on the way down, in Red Bluff. I may have mentioned once or twice that DH and I have a bit of a ritual in our U.S. travels. So it’s fitting that we end this story of the AHA San Diego Meet-Up with that fine aspect of American culture: PIE. 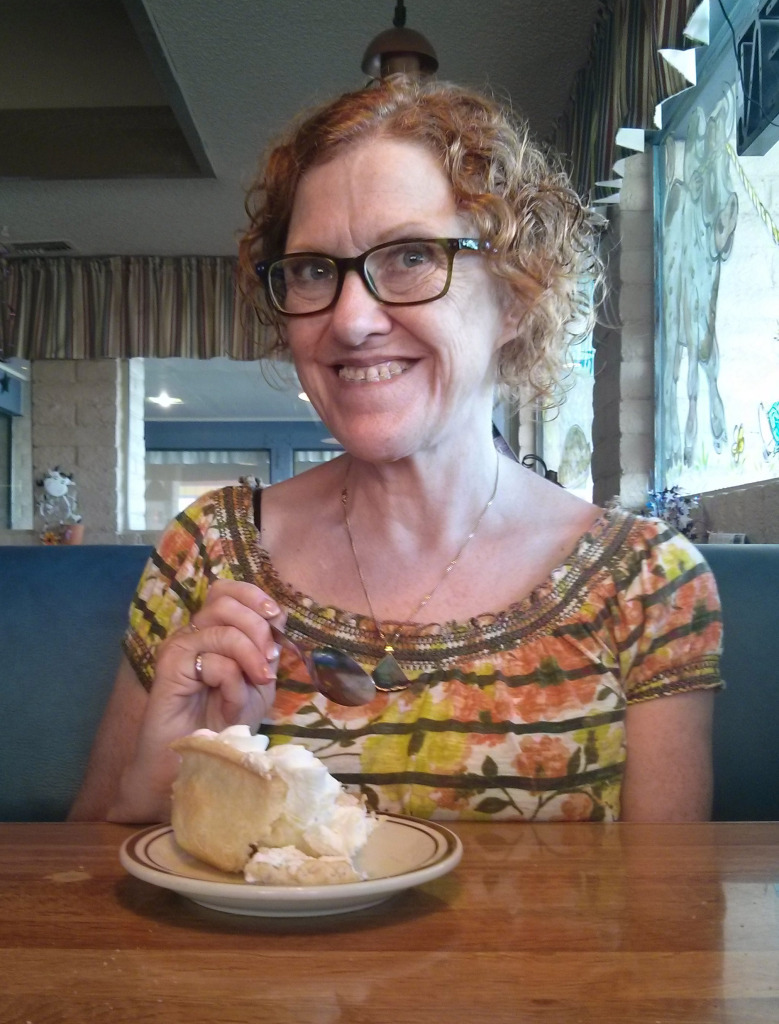 Photos by dogpoundphoto and Chaotic Her