I can sew well, but I hate it. It gives me back cramps. Worse, I’m cheap. If I find an item I like, but it’s too dear, I often seek an acceptable alternate. This posed a huge problem when I decided to attend the Jane Austen Society of North America Annual General Meeting (JASNA AGM) in Louisville, KY in October, 2015.

About a year and a half ago, when I finally got up the nerve to attend one of these annual gatherings for scholarly pursuits related to Austen, I knew I wanted to dress up. My friends, the Chat Chits at A Happy Assembly, joined me in perusing Ebay and Etsy for Regency gowns and bonnets.

Though prices started at just under $100, the cheap dresses were, well, cheap. A decent but simple dress could be bought for $150-250, most ball gowns were $250-$400, with higher prices for the couture models. The one I liked best was at the top of the range, as expected.

“Sew it yourself,” said one of the Chits, who owns a serger. I’ve found that those who own a serger think anyone can sew anything.

The gowns in so many of the photos of JASNA AGM, the Bath Festival, the Jane Austen Festival, and similar events have been painstakingly hand-sewn by their owners or someone like the vendors on Etsy. The big problem is that most are based on the same pattern from Simplicity. It has a lovely neckline, square with rounded corners. 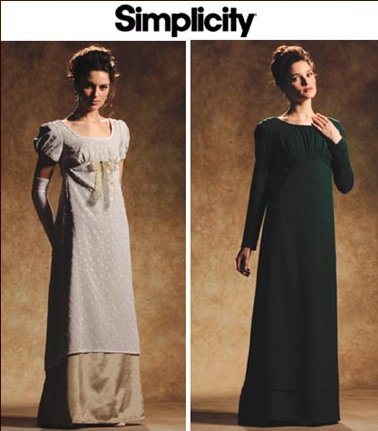 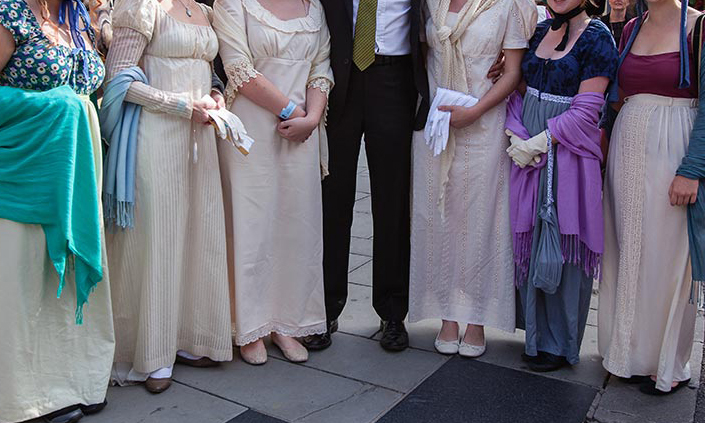 But I want something different. I follow several Pinterest collections with actual Regency gowns from museums, and the necklines are all over the map. From those plates, I noticed that many of the outfits I’d seen at Austen events had aspects from the Victorian era, and the owner had been duped by sellers who called them Regency. Some vendors will advertise Regency/Jane Austen/Victorian/Steampunk/Pioneer/Medieval/Fantasy/Titanic for the same gown! When I read more, some sites suggested purchasing a vintage gown from the ‘80’s, which are supposedly close to the right design.

While looking at gowns, I also saw various recommendations on other parts of the Regency ensemble. I decided to put together an outfit from items not purpose-made for Regency costumes, rather, I would find clothing articles and accessories that would suit with a bit of modification. I would also aim for minimal need for crafting or sewing skills, since some sites were daunting because of phrases like “Buckram molding.” 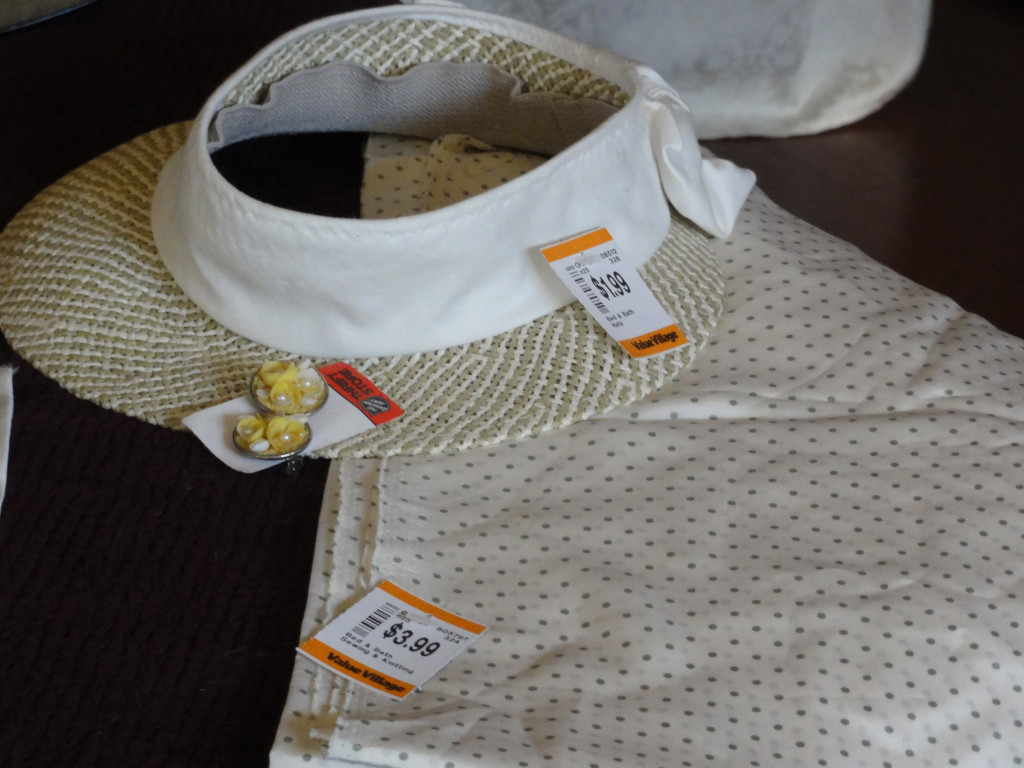 I made myself a rough set of “rules” for The Thrift Shop Regency Costume Experiment (tTSRCE). Okay, rules are meant to be broken, and it may happen, but for now I have restricted myself to these guidelines for procurement of raw materials:

We moved to a smaller home a few years ago, and performed several iterations of radical de-cluttering, so most of the raw materials I could have used have already gone to charity. All my dated or ill-fitting clothing, old shoes, Hallowe’en costumes and materials, linens, fabric scraps, even patterns! I never anticipated this costume, and decided I had no need for them. 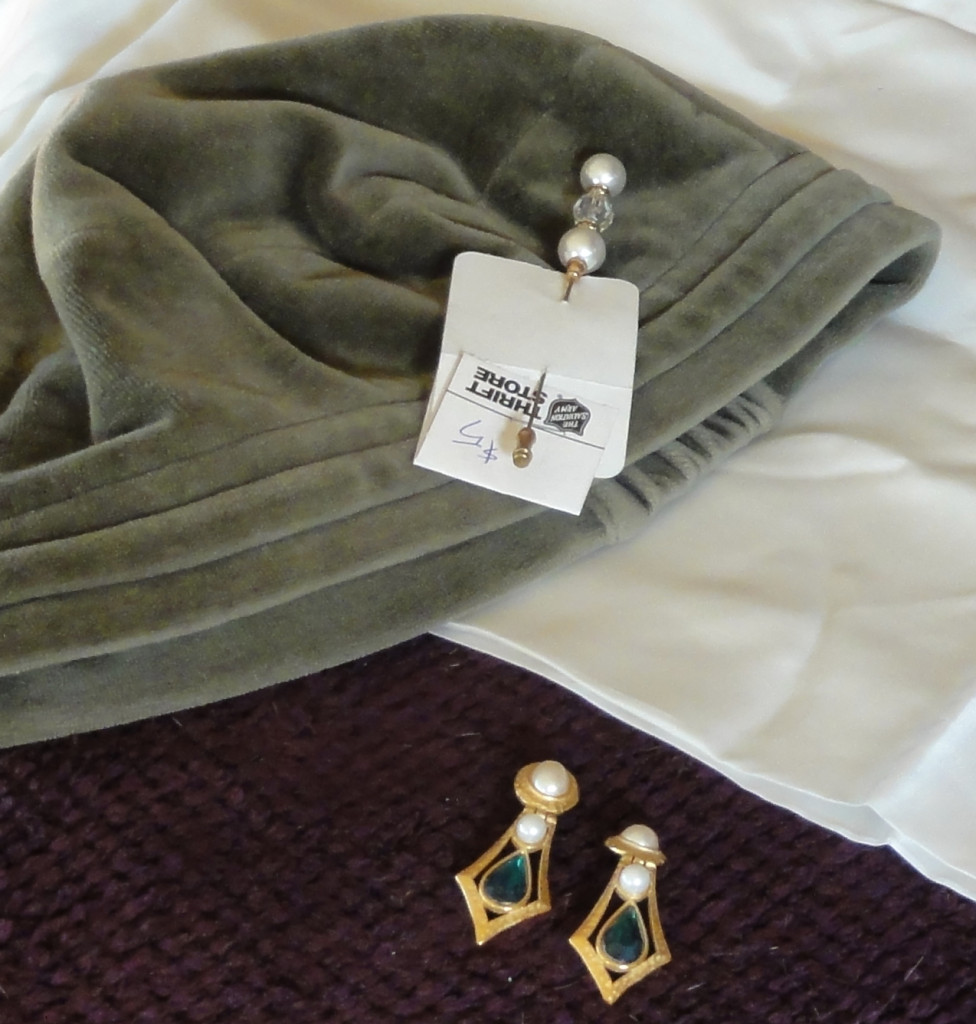 I started shopping last summer, and the photos here are some of the items I have procured so far, as well as ones I found in my own home, for example, the hat and earrings above. I found some items were easy to match to the styles from the Metropolitan Museum of Art; Boston Museum of Fine Arts; McCord; Victoria and Albert; Brooklyn; Swansea; and similar costume museums, and some more difficult.

I’m going to start the blog with a couple of easy, ones, so anyone who wants to do this will feel encouraged. But I’ll also address the difficult ones early, and return to them in later posts, to give readers time to find them. 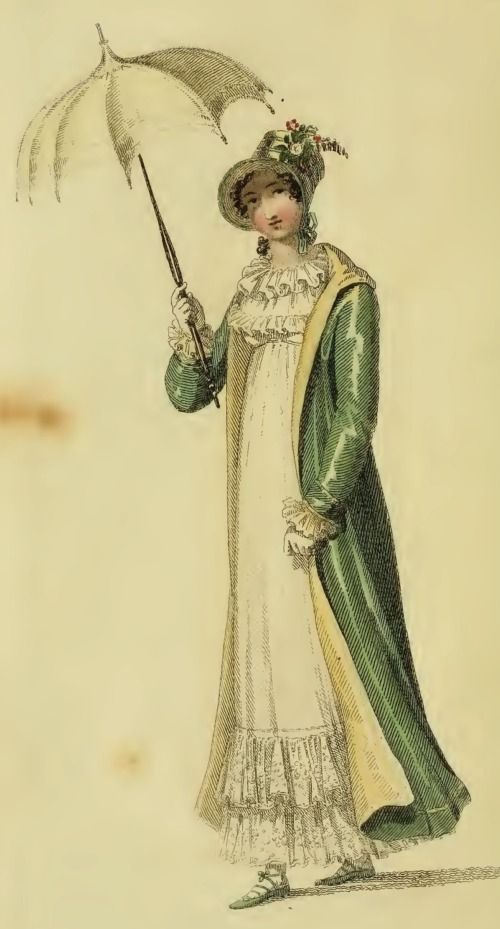