A photograph session with my antiques was the plan. It worked for all the individual costume parts, so why not for the reveal of the entire Thrift Shop Regency Costume? Because a better opportunity came out of the blue!

When a Jane Austen Tea fundraiser was mentioned by my local JASNA group on Facebook, I realized I’d be able to wear the full costume for an earlier photo op. Lucky me! I hopped in the little car for the short drive out to the event at Starling Winery, which was a great grand finale for my blog series. The grounds are stunning, and the day was warm and sunny. 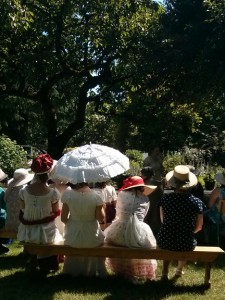 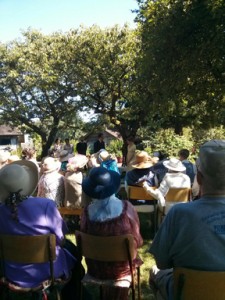 About 10% of those attending had a clue about Jane Austen era clothing, at least, that’s what I gathered from the costumes. Most of the rest wore a picture brim hat with mounds of netting, a long rayon sun dress from their closets, and sandals. There were a few fans and pairs of gloves, too. No one minded, though. Suddenly, I was less ashamed of my zipper. 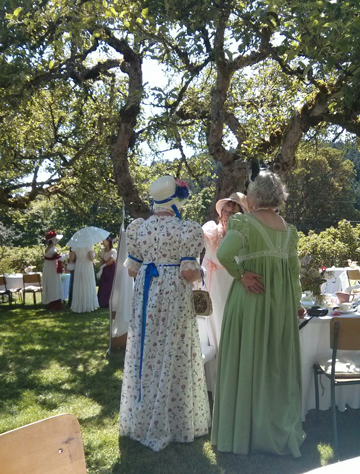 The Regency costumes were wonderful to see. Some had marvellous fabrics, others remarkable lace. A group of young women had bonnets to die for.

I discovered that, although I was wearing a dress with long sleeves, a high neckline, and a floor-length skirt, I wasn’t as overheated as expected, as the super-fine fabric breathed very well, and I could feel the day’s light breeze through it. 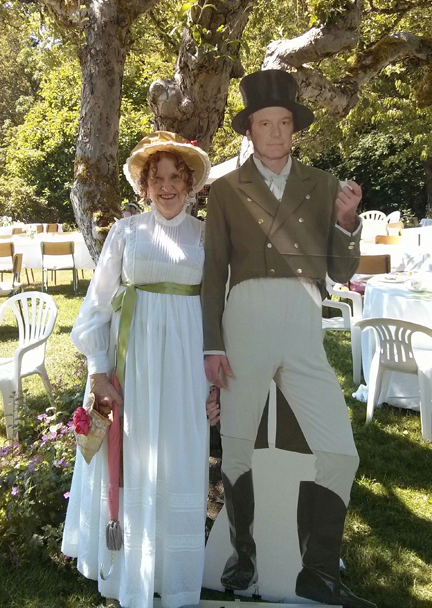 Sorry about Mr. Darcy. He was wearing one of those £50 All-in-One Regency Men’s costumes that actually has no shirt or waistcoat, just a dickey with a pre-tied cravat, and those are boot covers. He’s aged about 20 years, too. But he’s such a fine, tall, person, with handsome features and a noble mien!

$115 is about entry level price for a basic, Regency style, long-sleeved morning gown in unpleasant-looking but probably appropriate fabric, but with no petticoats or lace. It will also get a short-sleeved gown in a pretty cotton print and nice Regency cut, but none of the lace. Plus, this is an entire costume, not just the gown.

This means the Thrift Shop Regency Costume Experiment was a success. Yes, it is possible, and not all that difficult to assemble a nice, Regency acceptable costume at a low price using found, budget, and upcycled materials.

While I was checking for examples of gowns for my cost on Etsy, I was dismayed to see horrible non-Regency ball gowns being sold as such for $175 (plastic-looking fabric and buttons, modern cut) and $250 (modern fabric, non-Regency application of contrasting colour, and strange collar)! The interest in this topic has made all kinds of uneducated sellers decide they want a piece of the pie.

On the other hand, a couple of really nice ball gowns with attractive details and trim were offered for around $170, and both pulled off the look in synthetic. They were from different dressmakers. So if you want to buy a custom Regency gown rather than search the thrift shops, it doesn’t have to be horribly expensive.

Then a blouse for a morning gown look, etc., etc… well, you just have to follow the rest of the series!

Beyond the basic costume:

I have more materials than required for my base costume, but it gives me a different outfit for every event at the conference, plus some things to give away as gifts to Janeite friends!

In addition to the above, ready to wear articles include 4 reticules, three pairs of ballet flats, one pair of half-boots, three pairs of tights, two floor-length full slips, one black bustier, one fuchsia slip dress for an over or underdress, the makings for two turbans (scarves from one can also be bandeau head wraps), a medium-length, slightly curly pony tail hair fall, a second cap, The Pink Bonnet, two necklaces, a second pair of earrings, a bracelet, and a Regency-look Pashmina shawl.

Items requiring modifications to be worn include the Lydia Bennet hat, the Lady Catherine bonnet, a light blazer for a summer spencer, a pelisse dress, two long dresses requiring minimal modification to become evening/ball gowns. A lucky buy was a piece of faux silk in exactly the right colour to match the jonquil 1960’s dress for a ball gown. I was going to add a contrasting front panel to free up fabric for back gathering. Adding a panel at the back while I remove the zipper will be much simpler.

A variety of ribbon, lace, tassels, fringe, braid, bias tape, cording, beads, and some fabric remnants also are available for completing the above. The only items I may have excesses of are ribbon and a huge roll of 6” wide lace from a grab bag that can be used for sleeves or caps. I have material to make up to 12 reticules with my new designs!

At first, I went to one or two shops every two or three weeks for up to two hours. In February, I started to go at least once a week for 2-4 hours. Construction, modification, and decorating probably took 40 hours total. The greatest amount of time was spent in my head, thinking about how to best approach designs, and match colours and fabrics.

As this is a leisure activity, I hesitate to value my time any more than I would for redecorating my home or reading. Any excess of material (caps and reticules) will be given away.

The learning curve on Regency fashion:

Difficulties encountered along the way:

My own culling of items in my closet: 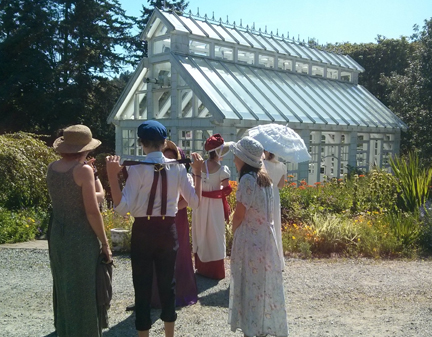 The dress I had in mind was elusive: 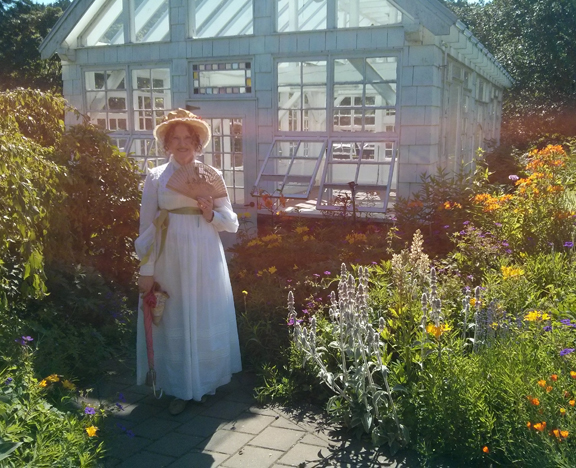 The opposite of the impulse buy problem:

Availability of the right type of stores:

I discovered a new love. I’ve started to follow Pinterest pages and Facebook groups on costuming, and have been tempted to buy books for more than coffee table use!

I know I’ll be using the sewing machine again, and this time, the challenge will be to use existing patterns and modify them to make them my own, as opposed to purchasing modern patterns. I may be crazy to do so, but I’ll learn along the way, just as I did for this Experiment.

My dream is to actually see the museum pieces. I constantly have little questions about this and that, and only looking at actual construction would help. Costumers with many years of experience and related degrees rarely have this opportunity, so it may be the impossible dream.

But if we did not dream, the death of our imaginations would turn us into black holes, imploding into the nothingness of an empty life. As an author, I rely on possibilities to light my life. Things seem to work out in the long run, in spite of any bumps in the road along the way! 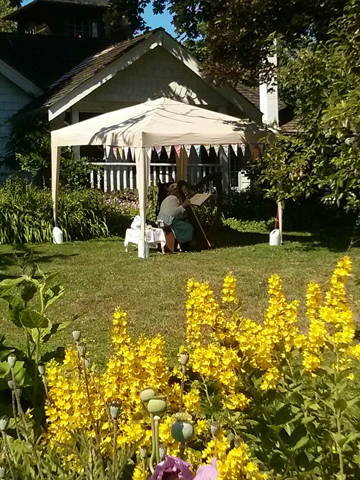 A point of pride:

I learned the bulk of the knowledge I’ve shared throughout this series by observing examples on the Internet. I read some excellent web site summaries, but avoided asking experts for help, and didn’t buy any books on the topic, as that cost could be put towards the costume.

I even got to the point in my acumen where I could pick out bloggers who knew enough to be dangerous and give inaccurate advice—kind of like how I started. I’m still learning, and it’s never been a chore. I enjoy the challenge of research.

The part of this story that was not intentional is important, that of the re-use of discarded items. It’s not just about being cheap, it’s about minimizing waste. Our society loves to buy and throw away, and the little thrift shops are full of evidence of that. But someone else’s discards became my treasure.

I’m going to miss those shopping trips. But wait… Mr. Suze needs a tailcoat, and breeches, and boots, and more!

I hope you enjoyed this little series of less than imaginative writing. I could never have imagined myself as a blogger, yet sometimes, fortune falls at your feet. It’s been an experience beyond the ordinary: I proved I could act outside of the box of consumerism, not just buy because I can afford it, and I’m proud of how far I’ve come.

Thank you for joining me on this trip.

This summer, I plan to focus on the final edits on Letter from Ramsgate, which has taken a back seat to this blog. Then I’ll be posting it twice weekly on A Happy Assembly!

At the same time, I’ll make my ball gown and a spencer, and there will be a post for each. I’ll show you my shawl, too. I promised a post on tricks to fake Regency, and I’ve developed my own pattern for reticules that I’ll share, as well as pulled an old pattern for a cap off a plate in a book and will draft it for you to use. So you’ll hear from me every 2-3 weeks or so, and then from Louisville, KY at the JASNA AGM! 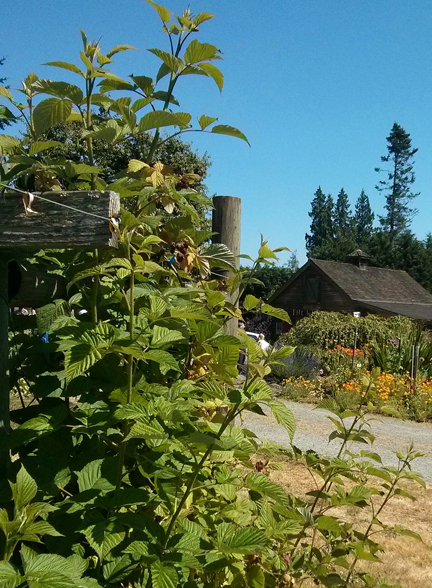 I’d like to promote the Centennial Belles of Port Alberni’s Jane Austen Tea on July 3 and 4, 2015, and the Port Alberni Jane Austen Festival on July 8 and 9, 2016. This little town has ambitious plans for 2016: to break the world record of people in Regency costume, which is currently regularly broken by The Jane Austen Festivals in Louisville, KY and in Bath, UK. Perhaps a few of my Janeite and Chat Chit friends may decide this is a good time to come visit me on their way there!