Today, you’ll hear all about how I had to do a complete re-write of four chapters and learned from it.

When my latest novel, Letter from Ramsgate, was accepted for publication, but before I submitted the manuscript, I was asked by my editor, Gail Warner, to make some changes. No big deal. The same thing happened with Alias Thomas Bennet. In that case, I cut the verbatim letter from Mr. Collins, a rehash of the Lucas Lodge party, and minor redundancies with Austen that added no value to the novel. 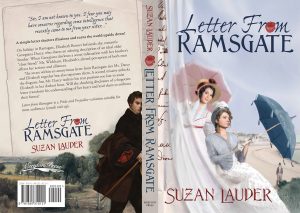 This time, Gail asked me to shuffle and reword the first few chapters of the book to try to get more face time for Darcy and Elizabeth, the protagonists.

In Letter from Ramsgate, our dear couple don’t meet for several chapters in the novel, so their early scenes are separate. Gail explained that this could be the reason I found my AHA readership slow to grow when I was posting a year ago: not enough D&E at the start of the story.

“Eureka!” moment! Readers want D&E and are dead bored without them. No author wants dead boring in their first chapters! Yeah, I know readers want more D&E than any book can handle! So we’ll give them D&E!

I thought about it for a while, and decided to write a short new scene. The basics of the scene had been originally told from a minor character’s point of view (POV): one Mrs. Isabel Younge. Mr. Darcy got to tell the story instead, and the novel now opens with that scene. (Click on the thumbnails to see a better view of the artwork for the “casting” of the main POV characters in Letter from Ramsgate.) We carried on in a linear time line—more about that in a minute—and I rewrote the bulk of the first three chapters into Elizabeth’s POV, with minor scenes going to Georgiana starting in Chapter 2.

Suzan Lauder’s “Learning from My Mistakes” Lesson #8: Avoid telling too much of your story through the voice of a minor character, particularly in the early chapters. Let your lead characters’ voices shine through.

Now, exceptions to Lesson #8 will take place when a skilled author attempts a complex approach to POV by showing the protagonist through the eyes of a lesser character as a narrator who will never be important. In that case, the narrator is often omniscient and carries their POV through the entire novel. I’m going to talk about POV choices and my own learning curve with POV in a later post.

As for Letter from Ramsgate, once I’d established with my readers that Elizabeth was the protagonist, then and only then did we have Georgiana’s minor scenes. The flashback from Isabel’s POV was all in one chapter later on rather than in the beginning of the novel.

With Alias Thomas Bennet, there were a half dozen flashbacks within the main story, and a few reviewers gave feedback that they didn’t care for flashbacks. To find that others find something I enjoy reading as a confusing style was a surprise, but rather than question their position, I decided to learn from the knowledge of their preferences. So Letter from Ramsgate has a very linear time progression in comparison.

Suzan Lauder’s “Learning from My Mistakes” Lesson #9: Take care with the use of flashbacks or “in media res” as some readers are confused by details that are “out of order” of a linear time line.

Don’t get me wrong, I don’t lament the style for ATB. I recently read it for pleasure for the first time (after a couple of dozen times reading it as a writer and self-editor!) and I like the way it turned out, how the flashbacks doled out the hints for the mystery at a slow but steady pace. It wouldn’t have been the same without them, and the mystery is a gem of that novel.

I’m going to talk about how to choose point of view in a later post!