I love to poke around the blog of historian, blogger, and author Geri Walton. It’s one of those research rabbit holes where you can disappear for hours on end. The blog boasts well-referenced articles on everything imaginable for the 18th and 19th centuries, as well as a series of excellent articles with writing tips. When she asked me to write a guest post, I was honoured. But what topic? 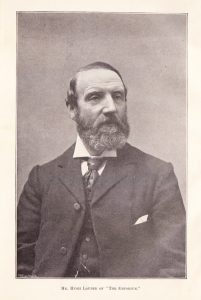 Hugh Lauder, author of Notes of a Trip Round the World, in 1896.

A year or so ago, I stumbled across a book on the used book website Abebooks by a fellow named Hugh Lauder of Kilmarnock, Ayrshire, Scotland, written in 1896. My grandfather’s Christian name was also Hugh, and my great grandfather William (Scotty) Lauder, the third son in his family, was born in Kilmarnock. But I hadn’t paid nearly enough attention when older family members spoke of the family.

I reasoned that Hughs are a dime a dozen in Scotland and assumed that this author could be a distant relation. Yet I was curious about the book and mentioned it to Mr. Suze, who purchased it for my birthday.

During his steamship trip to a dozen or so ports around the world in 1895, this Hugh Lauder had sent articles to the local newspaper. The book was a consolidation of those articles called Notes of a Trip Round the World. The flyleaf photo of the author said he was from “The Emporium,” so I asked if our family were “The Emporium” Lauders.

The original Lauder’s Emporium, from a billhead circa 1903. This building was destroyed by fire in 1923.

It turns out that this Hugh Lauder was my great-great-great-grandfather! Little William was seven when granda and his business partner, James Brown, decided to leave Hugh Lauder and Co.’s department store, “The Emporium,” in the hands of Hugh, Jr. and John Brown whilst he traveled the world in a steamship.

Early in the book, there’s a fascinating account of their ship running aground in the Bay of Naples. Four crew drowned while attempting to bring passengers ashore. I found more information on the event and several photographs online as the incident was rather famous in its time.

I hope you enjoy my g-g-g-grandfather’s story. While you’re there, take time to peruse the other links Geri has in her vast collection of interesting articles. As I said, I love her site!

The photograph of Hugh Lauder is taken from a bookplate in Notes of a Trip Round the World, Hugh Lauder, Kilmarnock: Dunlop and Dresden, “Standard” Office, 1896.

The photograph of the original Lauder’s Emporium from a billhead circa 1902 is courtesy journalist and author Frank Beattie of Kilmarnock, Scotland. The Words & Works of Frank Beattie on Facebook. Twitter: @mykilmarnock

Geri Walton’s non-fiction book, Marie Antoinette’s Confidante: The Rise and Fall of the Princesse de Lamballe will be released on Pen and Sword Books and Amazon UK on September 30, 2016. Geri Walton on Facebook. Twitter: @18thand19thC

Next week, I’ll have that promised guest post by Madame Gilflurt, whose non-fiction book, Life in the Georgian Court, will be released in the US on September 2, 2016!

I’ll follow a week later with several more posts on my “Learning from my Mistakes” blog series on writing and editing.