“Elizabeth could bear it no longer. She got up and ran out of the room…”

“…Elizabeth was forced to put it out of her power by running away.”

Years ago, I was a leader in my profession. I spoke at national conferences, local reporters sought me out for a quick comment every month or two, and important policy-making groups invited me to join as an active and knowledgeable board member. I sat at the best tables at local fundraisers, was selected to represent my profession in a nomination for a local YM-YWCA award, and lost out to Bill Nye, the Science guy for a prestigious national award in STEM (Science, Technology, Engineering, and Mathematics) awareness! During that time, I still personally facilitated STEM  awareness activities with grade 5 classes a couple of times a year, just for fun.

I was terrified in casual social situations with larger groups of people, therefore, at the multitude of social events that required my face, I fortified myself with wine ahead of time and during the event. You see, added to the mix of mental health acronyms I have been labelled with is Social Anxiety Disorder.

When serious mental illness took over my life (treatment-resistant depression and PTSD, among others), I was no longer able to participate in most mainstream activities, and my involvement in my profession and related volunteer activities ramped down quickly. Alcohol and caffeine hinder the efficacy of more appropriate medications, so I chose to eliminate them in favour of getting well. Even though I’ve been treated with CBT (Cognitive-Behavioral Therapy) with exposures for the social anxiety, I still find myself frozen in new social situations.

Fast-forward to my enjoyment of all things Austen, and my intent to attend the JASNA AGM in Louisville this fall to absorb the intellectual side of my fascination. The trouble is, I know only three people who also plan to attend, and I’ve have only met one of them in real life. Of course I’m more than a bit nervous! It only got worse after an experience of last weekend.

I went to my local JASNA meeting on Saturday in hopes of meeting more than the three people I interact with on Facebook. I had forgotten the meeting, and saw the reminder on FB ninety minutes before, just as I was about to eat lunch. I barely had enough time to change my clothes and drive over.

They ask for $5 and some treats from those attending, but obviously, I had no time to bake something. Last time, I had missed the fine print about the treats, yet I ate enough for three Suzans while I sat by myself, watched everyone else chat, and longed to join them. I very nearly decided not to go this time because I would once again be empty-handed.

I thought of an alternate offering, and poor DH watched me tear apart my house and almost destroy a cherished painting in the box that also holds extra copies of “the book” (my novel, Alias Thomas Bennet). I wrote a cute note inside and signed it, intending to throw it in with the door prizes as my offering in lieu of treats.

On the way, I contemplated stopping at Walmart and snagging some Little Debbie’s, but I was late already, and uncertain of the route. JASNA events are usually held in a church hall near the intersection of Cedar Hill Road and Cedar Hill Cross Road. Yup. No chance of confusion there. There are few other roads that intersect for a shortcut, as there’s a small mountain in the way. I stressed over getting lost, as well as about being caught putting my earrings on at red lights, as the local police have ramped up their distracted driving campaign. Of course, the backs never want to meet the posts when you’re in a rush.

The presentations had started when I entered, so I missed the chance to talk to the lady who organizes the door prizes (one of the three I “sort of” know). She was in the middle of the room, which was full of chairs wall-to-wall, and I wound up on a sofa off to one side, by myself. I enjoyed the talks on members’ varying experiences at JASNA Montreal, and one lady promoted her own newly-published novel, so I felt better about bringing mine.

Yet, when the time came to draw for door prizes, I froze. I couldn’t offer to add “the book” in front of everyone!–How would that make me look? I couldn’t even drum up the courage to collect my draw ticket when they offered them to latecomers!

Watching the draws relaxed me a bit. It was fun to see the Jane Austen toothpaste and other items distributed. Then, it was announced that the treats would come out, and we could socialize. The major fear and anxiety that had gripped me returned, but it ramped up even more. I couldn’t handle this!

I sought out The Door Prize Lady. As soon as she finished speaking to another lady, I shoved the brown-paper envelope with “the book” into her hands and said “someone” donated it for a door prize for next time. I didn’t even wait for her to peek inside, just turned to leave. She asked if I could stay, and I said I had a lot of commitments (which is totally true–I’m so over-committed, it’s eating up my soul).

The other lady I knew was busy in the kitchen making dainty trays. (I suspect she’s appointed herself The Boss of Food because she’s shy, too.) As I passed by the kitchen on my way out, she stopped me to ask about The Thrift Shop Regency Costume Experiment blog, and I babbled on uselessly for a minute, then bolted again.

I don’t know how I’m going to handle Louisville. When I first announced I was going, a number of Chat Chits said they’d join me, but reality set in for them. I’ll keep you up-to-date on whether I can be comfortable with that, or take a cue from Elizabeth, and run away, like I did last weekend.

I apologize to those who expected a post on shoes. The project will continue, whether or not I can find a place I’m actually comfortable wearing the costume. I’m having a great deal of fun creating it, though juggling my time has been taxing. The good news is, I found “The Dress!” 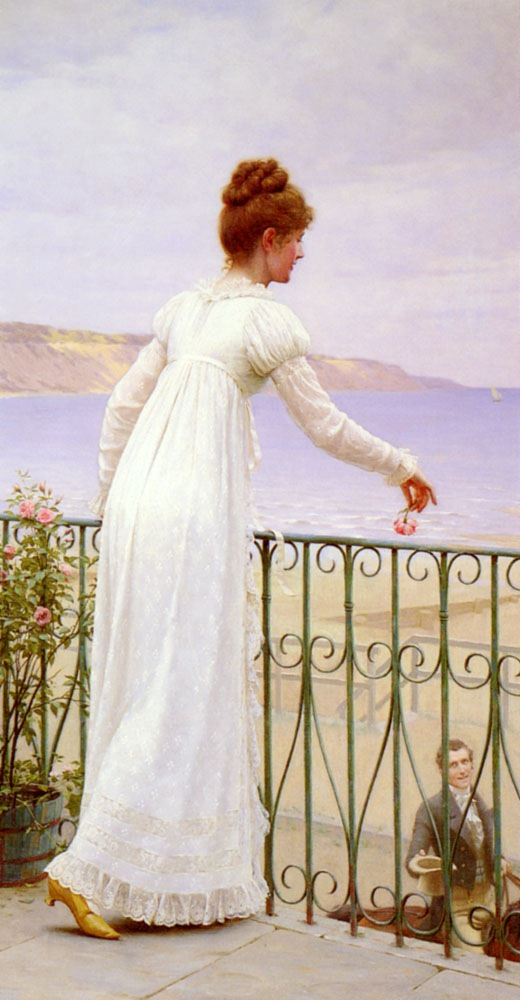