Today we’re traveling to Janet Taylor’s blog, More Agreeably Engaged, to find out how Northanger Abbey affected my love for JAFF, the evolution of my writing, and a bit more about Thomas Bennet.

Not satisfied with blogging, Janet is also the cover artist for ATB, so you might want to browse the rest of her site!

See you over there!

Today, I’m a guest blogger at Leatherbound Reviews! Come on over to see how I interpreted Austen’s original Mr. Bennet in preparation for creating his opposite for my book! 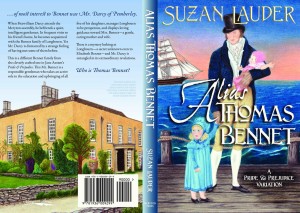 Click on the image to view a larger version.

When Michele at Meryton Press told me the proposed timeline for editing my soon-to-be-released novel, Alias Thomas Bennet, I immediately wondered how it would affect my holiday. Yeah, an amazing opportunity to have my “baby” published comes up and I’m thinking how I’ll manage to sneak away and not let the publisher know that I’m not actually available for the entire editing period.

You see, hubby and I like to travel, and his latest obsession is road trips. We pack ourselves into our little convertible and drive a week or so in one direction, checking out the sights. Top down, Mom’n’Pop motels, share plates, lots of CD’s, mountains and meadows and orchards and beaches.

You’re saying, “You take that car? But it’s so little!” Yup. Of course, my nieces would each need their own car because the entire trunk is the size of one of their suitcases. I use something just a bit bigger than a carry-on, with the shoes packed outside of it.

But we had planned on being away for two weeks, and I wondered how it would affect my ability to work with the editor, especially when I was at my mom’s, where there is no wireless. I knew I could do my best but it would be an uneven schedule as we’d be pretty busy driving and sightseeing and visiting.

But when I started talking to my editor, Gail Warner, my perspective on being away during editing adjusted.

You see it was similar on the other end, too. This book was not destined to be edited sitting still, so to speak. Instead, Alias Thomas Bennet crossed the country at least once, while Gail and her husband took a different approach to the road trip: the RV. Everything you need in one well-organized vehicle, including the cat. A perfect retirement nomadic home.

The nomad was at home firing chapter after chapter of edits my way, and I was at my mom’s in small-town Saskatchewan, Canada when I started getting accustomed to the fact that I use too many commas. It was also the first time I had really spent talking about the book to anyone outside of my small group of JAFF friends. My sister had a barbecue and I had cousin after cousin make inquiries.

“It’s based on the Jane Austen book, Pride and Prejudice,” I would tell them. “But I’ve made some changes to the characters and built a mystery in.”

The conversation didn’t extend much further than the expression of wanting their copy signed—it was a party, after all, and I see these people only every few years, and had lots more to talk about—but it was really cool to feel the pride that they had for me and excitement about the book. I come from a family of readers, but more along the lines of bestseller readers than classics readers.

The real discussion took place with Mom, my sister, my brother-in-law, and my husband a few days later. This particular sister is a cop, and most of her reading is Baldacci and Grisham and the like. But both my sisters read Pride and Prejudice in preparation for this book. Isn’t that the sweetest thing?

First, of course, I had to explain Fan Fiction, how people get together on the Internet and write and read stories based on books, movies, or TV shows they like. Mom, who is an avid mystery reader and devours every P.D. James novel in hardcover the moment she can get her hands on it, mentioned Death Comes to Pemberley.

“You know how Mr. Bennet is absent as a father?” I asked.

My sister nodded. I wonder if she was thinking about Dad too.

“I thought that a lot of the flaws that contributed to problems in Pride and Prejudice could be rooted in Mr. Bennet. If he had been a better father, how would it affect each family member? And how would that affect the major plot points in the book? What would Darcy think of the Bennets, and how would that change his relationship with Elizabeth? So that’s where the idea started. What if Mr. Bennet was a better man?”

Now I have to expand on the comment about my dad. He was lucky to have a very stable and responsible wife and even if he had avoidance issues with things for which he probably should have taken responsibility, he did parent when we got out of control. We were pretty good kids, but had our teen moments where he did act.

But then Mr. Bennet did too. It was just that Lydia was already in London by the time he took responsibility. As for day-to-day, well, Austen is pretty clear that although Mr. Bennet is clever and witty, he’s pretty hard to respect.

It’s not that she doesn’t like him. She finds him pretty funny, and enjoys his quirks. She also shows him as clearly enjoying himself at the expense of others, and that’s amusing to the reader as well, even if it is a more than a little rude and unkind at times.

Interestingly Mr. Bennet is pretty much a fun character until the letter from Darcy. Then Elizabeth starts seeing his flaws, and we are shown a much more critical picture of the man who “would never exert himself.” When he won’t deal with the issues related to Lydia going to Brighton, Elizabeth further criticises “the impropriety of her father’s behaviour as a husband,” and his bad influence in treating her mother poorly is “highly reprehensible.” Then we see him as being glad of having needed a “trifling exertion” to solve his family’s problems, rather, he left it in the hands of others.

Sometimes Austen judges Bennet by making fun of him and his inability to deal with the personality of his wife at the same time as she is making fun of Mrs. Bennet, resulting in the reader seeing both of their shortcomings in one short sentence.

And here is another area that intrigued me as a writer. Why is Mrs. Bennet so flighty, fearful, and fretful? That’s day-to-day! She comes off as almost unhinged when Lydia runs away. It occurred to me  that perhaps a trauma had affected her, and as a result, the instability we see in her character in Pride and Prejudice continues unchecked because she’s really had nothing in her life to ground her properly.

Then what if she had a husband that performed that duty for her, helping to calm her when she was upset? Here again is another area in which this changed Mr. Bennet that intrigued me so much as a writer could have a great deal of influence. Better Mr. Bennet, better Mrs. Bennet, better Bennet girls, totally different Pride and Prejudice.

But how to accomplish this better Mr. Bennet? That’s the cool part!

If Alias Thomas Bennet was just a story about the new-and-improved Bennet family and the resulting changes in the course of Pride and Prejudice, it might just be boring. In changing so many of the entertaining and dramatic moments in Austen’s story, we lose a lot of the best scenes; for example, if Darcy no longer can object to Elizabeth’s family, we lose a major issue in the conflict between Darcy and Elizabeth.

But there is more to the story than that, and Mr. Bennet’s past plays into Darcy and Elizabeth’s relationship, and vice-versa, to make for some very interesting alternatives to the original story line of Pride and Prejudice.

Alias Thomas Bennet will be released by Meryton Press in November 2013.