In September 2011, my husband and I drove the Pacific Coast Highway (US 101) from Olympia, WA to San Luis Obispo, CA, including Hwy#1 north of San Francisco. If you ever get the chance, take this drive. One of the alternating photos in my banner above is Pacific City, OR, where we watched surfers and “sand-boarders”—they ski the dunes.

We wanted to continue the drive farther south one day, and when fellow AHA Chat Chit defiantfalcon—who is also my plot beta for my current work-in-progress, Letter from Ramsgate—said she planned to go to San Diego on vacation in September 2014, we started coordinating plans. The next person we contacted was SoCal resident josurinu, because the collaboration on her excellent AHA stories Someone Like You and sequel Someone Like Me cemented the friendship between the three of us. We call each other Team SLY.

This is the first in a series of posts that will follow my latest Austen-themed road trip, which ends with the Team SLY meet-up! It was a wonderful trip, with sunshine and friends all the way. Oh, and that thing Americans do best: PIE.

We started early for each of two long days on the I-5 to San Francisco, where we caught up with BP, my husband’s friend since they were boys in Winnipeg’s North End, and his wife, Susie Hara, whom I met the earlier trip. Both had careers as writers, though it was no longer their primary employment.

During the first trip, Susie asked what I did for a living, and as I mentioned my job, my husband interjected: “She also writes.” I was so embarrassed! At that time I told no one. It was therapy for my PTSD and an outlet to express my enjoyment of Austen—no more than a hobby.

Susie corrected me: “You’re a writer. There is no such thing as amateur. Be proud of your craft.” There was such firm finality in the way she said it, like gospel. In addition, we were headed uphill, and she was above me! But that simple change in attitude  enhanced my pride in my work.

So it was wonderful to see her again last month. We met her and BP at a restaurant they recommended in their ‘hood, the Mission District, which was fairly empty when we arrived. I gave Susie a signed copy of my book, and she blushed at the note that referred to her comment about not being amateur and how it changed my attitude.

But I was in for a surprise! Her mystery novel, Finder of Lost Objects, had been published in March! I was so happy for her! It has an average of 4.9 stars on Amazon and the premise is certainly unique.

The four of us chattered away intently on many topics, and we were almost done our meal when I noticed the restaurant was packed, and everyone else was Latino. I enjoyed my ensalada de nopales, pleased to find it offered outside of Mexico, but I had no idea this was a favored haunt for the locals. I liked that, a lot!

BP and Susie then took us for a walk, and it was with mixed feelings I saw many changes in the Mission. It’s cleaned up in a certain way, but the new stores have stolen some of its quaint charm. At this rate, it won’t be long before Forever 21 and its ilk move in, and papusas will disappear because the rents are no longer affordable. 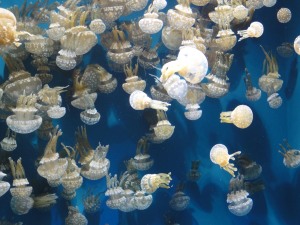 We said good-bye to SF and had a great day in Monterey, where we chilled at the kelp pool and were hypnotized by the jellyfish dance at the world-class aquarium. It’s the 6th largest in the world, and is rated the top aquarium in the world by TripAdvisor, number 4 in the world by The Weather Network, number 6 by Conservation Institute… pretty much every top ten list there is! The weekly farmer’s market is on the same street as our hotel, and we had enjoyed it for dinner in 2011 and again that evening.

Wake up early… we’re on to Santa Barbara, Oxnard, and LA in the next post!