Anachronisms pull the reader out of the story like no other writing issue can. My novels are predominantly set during the period of Jane Austen’s Pride and Prejudice (1811-12) in the Regency period in England (1811-1820). Because of this, I try my best to ensure that I don’t use language that was coined at a later date. Some non-Regency words are subtle and not that important, but some can have a jarring effect on the reader. The last thing you want is that WTF moment because of language you could have easily avoided.

Suzan Lauder’s Learning from My Mistakes Lesson 14: When writing in a specific period in history, use good judgement to choose language and scene setting used that suits that period and doesn’t include obvious anachronisms or incongruities with the period.

This article is focused upon language of the Regency period.

Over the years I’ve been writing, I’ve developed an extensive list of words that were not in use before 1813. My simple 6-page alphabetical listing has roughly 750 words, and a longer (65 page) document lists alternate choices for many of the more common words and phrases that are non-Regency. These were generated for the most part by beta readers and editors catching me in my writing. I am simply the person who recorded the incongruity.

I use the Online Etymology Dictionary and Johnson’s Dictionary of 1806, 1812, and 1836 (via Google Books) as references, as well as other Regency era Google books. The full Oxford English Dictionary is another excellent reference, but it’s too expensive for me.

This blog post contains a sample of the most common words that were not in use during the Regency, plus a few that were in use in a different sense during that time and some non-Regency non-British language words, since most Regency romances are set in England. For fun, I’ve broken the words down to headings that will be of interest to writers and readers alike. I’ve thrown in some okay Regency words that are interesting as well.

Most commonly noticed in non-Regency words in Regency novels, considering how contemporary they are:
Mesmerize (1862 for “sense of enthral”; prior it meant a specific type of hypnotism.)
Normalcy (1920 outside of mathematics.) Normal, abnormal are also non-Regency.
Guffaw (A Scottish word, not used in England before 1836, and then low classed.)
Livid (Before 1912 it was a colour.)

The modern words and expressions that jarred me out of the era when I read them in actual Regency romances:
“Get yourself together.”
“No worries.”
“…plead the fifth.” (set in England!)
“That was (a time period) he’d never get back.”
“…playing head games.”
“Where had that come from?”
“Going through the motions…”
“…brutally honest.”
“…let it slide.”
“Hissy fit.” (1983)
Morphed (1955)
Gobsmacked (1985)
Snit (1935)
Hello and okay, both American and not used in Britain until the 20th century.
Contractions used for higher-class and intelligent characters. They were slang then. 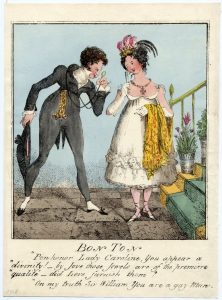 Most over-used words from Austen by JAFF writers (these are okay words for the Regency era):
Impertinent
Sardonic
Alacrity
Panegyric
Pedantic
Obsequious
Sensible for sensitive
Handsome for pretty. The former means sublime and the latter means natural beauty.
“Superior sisters” for the Bingley ladies.
“Breaking their fast” (Austen used the word breakfast.)

Note: I’ve been guilty of using some of these words too much, too!

Worst American non-Regency words and phrases (most are also not modern British English either):
Gotten
Outgoing
Upcoming
Reckon
“Right now” for “at present”
Store for a shop, including in compound words
Braid for plait
Corn for maize
Stage for stagecoach
Jeopardize
“Nice” to describe a person
“I guess”
“Visit with” for chat
Write or wrote instead of “write to” or “wrote to”

Another error is Australia and Canada as countries. They were not yet countries, they were groups of separate colonies with different names. Thus Halifax, Nova Scotia was not in Canada, and Upper Canada and Lower Canada combined were called “the Canadas.”

The spellings realise, scrutinise, and organise are not Regency. Realize, scrutinize and organize are the correct Regency spellings, whereas today either spelling is acceptable for British English, and the latter are correct American spellings.

Hardest non-Regency words to find replacements for:
Snob
Burp. All synonyms are low-classed.
Assess/evaluate/“take stock of”/scan/scour (for looking at a person)
Contact/connect/interact/liaise
Pouty
Bored/boring as in nothing is interesting. Reword to use ennui, tiresome, or tedious.
Corridor, hallway, and passageway are American.

Okay Regency words and phrases that surprised me!
Electric, electrify in the figurative sense (1787 and 1752).
Heavy meaning serious.
Gift as a verb for giving something.
“Beat about the bush.”
“At sixes and sevens.”
Fall for autumn was acceptable and became an Americanism much later.

Words out of style in the Regency that came back into use in the 1830s:
Doff, don were considered archaic from the mid-1700s.

Words with a bigger meaning during the Regency period:
Terrific: think very, very terrible! A terrific headache is your worst migraine.
“Magnificent!” “Marvellous!” “Wonderful!” were grand exclamations, not just “That’s fine/good.”
Chuckle meant to guffaw until the 1820s, so I use it only where it works for both definitions so savvy readers won’t mind! Remember, guffaw is not proper in the Regency.

Words with a lesser meaning:
Disgusting: think holding your nose in the air or being slightly disappointed as opposed to vomiting in your mouth as a reaction to a disgusting person.

Words with many meanings now that had only a few of our modern uses in the Regency to the point where I try not to use them unless consciously in the one Regency-appropriate situation!
Checked
Headed, heading
Tension, strain, mood

Words whose meaning changed or definitions were added:
Attitude meant stance not a state of mind or antagonism.
Bony meant “strong, stout, full of bone,” lusty meant “stout, healthy, able of body,” and stout meant sturdy, but did not mean fat.
Snort and tic were literal and only described animals’ actions, and nothing related to a human reaction, commentary, or feeling.
Condescending and affable described a person of higher rank who made the effort to be nice to a person of lower rank, different than our modern usage.
Genteel to describe upper class people was only used by “ignorant” lower class people.
Sensual meant lewd or unchaste, a more negative connotation than the modern one.

General advice on how to deal with non-Regency words:

Limited time offer: For your copy of my alphabetized list of about 750 non-Regency words, leave your email (spelled out with spaces such as “username at gmail dot com”) in the comments before July 19, 2017.

All follows and comments become entries for the gift package draw at the end of this series, which will include a signed copy of my novella A Most Handsome Gentleman (fall 2017 release) as well as some handmade and signed Suzan Lauder Regency costuming gifts.

For simplicity’s sake, I hope the little list in this post proves a useful start for Regency writers! 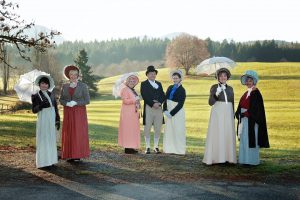 Special end note: I’m in Port Alberni next weekend for a fun costuming event: the town of 25,000 is attempting the Guinness record for people dressed in Regency costume on Saturday, July 14, and I hope you’re there as part of the count, as we’re going to beat the 2009 record of 409 people! I’m joined by Austen Variations author Shannon Winslow and Regency romance novella author Helena Korin for a readings event and signings, as well as my sister and Mr. Suze. I’ve made some new costuming items, and my sister did brilliantly by following my Regency Costuming Cheat Sheet! I’ll share the results in a couple of Thrift Shop Regency Costuming Experiment posts!